On International Women’s Day and beyond, we are thankful for all the women’s movements, women’s organisations and women’s specialised support services who have been working tirelessly to fight for women’s rights. Today, some of our Step Up! Campaigners are sharing their experience with us.

We are part of the Step Up! Campaign since 2017. Working in the field of eliminating violence against women is highly important to us. We are happy to be part of the Step Up! Campaign, since it provides us with a place to connect, communicate and share common experiences, as well as brainstorm new initiatives, and increase connections. The exchange within the campaign is inspiring and we strongly belief that cultural diversity is an asset, added value and an opportunity to promote our work.

We joined the Step Up! Campaign in 2020, so we are a rather „young“ campaigner. We are grateful to be part of this engaged European campaign, which tackles the global issue of violence against women* and children. We are inspired by the opportunity to continuously learn from our fellow campaigning organisations from over 20 different European countries – a diversity which clearly matches our daily work. Step Up! widens our horizon as an organisation and inspires us to think globally and act locally. Everyone can join!

Since 2013 VWH is actively engaged in promoting the Istanbul Convention. From 2015–2019, we organized street actions “StepUP! Ratify the Istanbul Convention” in front of the Government building and/or the Parliament. During those actions, we shed light on the significance of the IC for the effective eliminiation of violence against women in terms of prevention, protection, prosecution, perpetrator punishment and proper policies. Due to COVID–19, the actions are now (since 2020) carried out on social media. Within the Step Up! Campaign and with the campaigners, we have been determined to strongly advocate for the Istanbul Convention.

As an official member of the WAVE Network, we serve as a focal point for Montenegro. In 2016, we became Step Up! Campaigner for Montenegro and we kept this role ever since. The Step Up! Campaign has showed us a good way in communicating with the beneficiaries and general public, and serves as an excellent tool in raising awareness on issues such domestic and sexual violence against women and girls.

The Step Up! Campaign has been followed by our Association since its birth, It started with a training in December 2015, attended by Alice degl’Innocenti. Alice and Anna Pramstrahler (Italian AB WAVE Member) were then part of the launch of the Step Up! Campaign on 25 May 2016. The Italian team increased with Silvia Menecali as a co-compaign coordinator of Italy (2016) and then with Marta Picardi (2019). We are happy to share that we have had two WAVE Youth Ambassadors already. From 2018-2020, the Italian Youth Ambassador was Antonella Crichigno and now Ginevra Candidi is in charge. The Step Up! Campaign in Italy is followed and supported by all of us.

The Step Up! Campaign is very important to us. Fighting against gender-based violence with other women’s organizations across Europe makes us feel stronger. Strengthened efforts to end Violence Against Women is essential to guarantee women´s rights and a free and equal Europe for all. Together we are strong! Join the Step Up! Campaign! 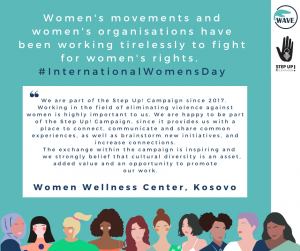 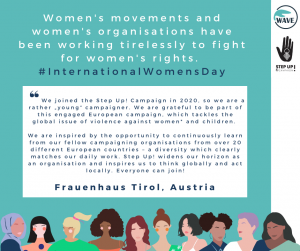 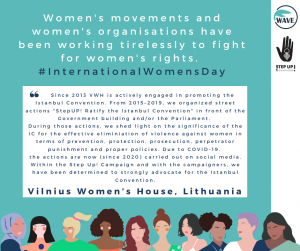 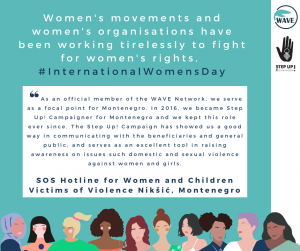 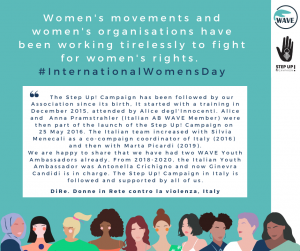 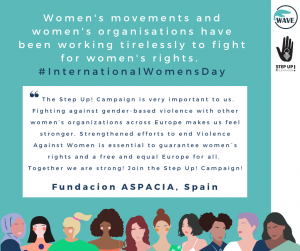